More information about the Best of the Cape Full Day tour

The Cape Town Township Evening Tour gives you an insight into the cultural diversity that Cape Town has to offer. Langa Township, Khayelitscha Township and the famous District Six are some of the popular spots you will have the opportunity to experience on this tour. From the local delicacies, traditional dancers and healers, shebeens and local township schools, you will be mesmerized by the vibrancy and excitement that these townships hold. More than anything, the people that live in these townships will have the biggest impact on you – They truly live by South Africa’s philosophy of Ubuntu.

Some interesting history and facts about townships in the Cape:

District Six is one of the most famous Apartheid areas. In the 1970’s, almost 60 000 people were forcefully removed from the area by the apartheid government. The District Six Museum gives you an insight into the area as it once was, as well as history on the whole apartheid era. It is a popular tourist attraction, attracting millions of tourists every year.

Along the busy N2 highway, you will find the fastest growing township in the Cape – Khayelitsha, which means ‘New Home’. It was formed during the apartheid years in 1985 by many of the residents that were forcefully removed from District Six. The population in Khayelitsha is now about half a million residents.

Langa Township was also formed in the apartheid days when thousands of residents were removed from other areas and had to find new homes. The name ‘Langa’ came froma Chief and renowned Rainmaker – Langalibalele, who was imprisoned on Robben Island in 1973 for rebelling against the Natal Government. Robben Island is where Nelson Mandela was also imprisoned during the apartheid years.

A Shebeen is a traditional South African pub and brewery in the townships where traditional beer is crafted, which you will have the opportunity to taste.

You will have the the opportunity to see township entrepreneurs in action including barbers, tailors, and little markets. You can purchase South African souvenirs from them.

On Sundays there is a charismatic church service

The vibrant atmosphere, colourful entertainment and strong culture in the townships of Cape Town, is a once-in-a-lifetime experience. The townships are full of arts and crafts including beading, weaving, wire goods and fabric that can be taken home as souvenirs. A visit to the Shebeens that have South African beers, braais and music, will leave you feeling exhilarated by the South African culture. 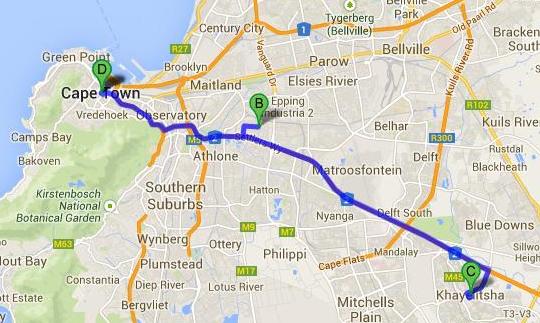 Included in the tour

General information and condition of sales

- In case of non-presentation on the tours, full cancellation fees will apply
- You can cancel until 24 hours before your tours
- Not available on the 25th & 31 st of December as well as 1st of January
- General information and conditions of carriage prices, routes, places of interest, destinations, hotels and restaurants are subject to availability and to change
- Tour departure and arrival are approximate
- German, French, Spanish as well as other foreign language guides are available on request
- All our vehicles are insured substantially for passenger liability
- All tours are subject to minimum number of passengers
- Luggage And Personal Possessions Are Carried At Your Own Risk
- Please Ensure That Valuables And Travel Documents Are Kept Safe At All Times
- Timings are approximate and depend on weather and traffic

This is a tour that can be enjoyed by the whole family. Enjoy the culture, history and vibrancy of the Cape.